3D
Scan The World
2,509 views 114 downloads
Community Prints Add your picture
Be the first to share a picture of this printed object
0 comments

This fragmentary stele depicts an athlete holding a strigil and an aryballos. He is accompanied by a small servant and by his two hounds. The representation of the deceased in familiar surroundings is a common theme in funerary steles, which used recurring, conventional motifs throughout the fifth and fourth centuries BCE. The treatment of the anatomy and the level of relief suggest that this example dates from the mid-fourth century.

The deceased is represented on this funerary stele, the top part of which is missing, by the figure of an ephebe, standing facing forward and naked except for the himation wrapped around his left forearm. The young man carries items used on the palaestra to indicate he is an athlete: in his right hand is a strigil, used to scrape sweat and sand from the skin after training at the stadium. In his left hand are the cords of an aryballos, now lost.

At his feet are two greyhounds, one sniffing the ground while the other, in the background, lifts its muzzle to its master. To the left, a small figure shown in three-quarter view, raises his head, representing a young slave who assists the athlete after his training session. In his crossed hands are the ends of the leashes, originally highlighted in polychrome: like other Greek monumental sculpture, funerary steles were originally painted. 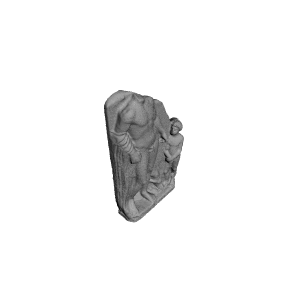 ×
0 collections where you can find Athlete Accompagne at the Louvre, Paris, France by Scan The World