Athlete or Hero at The British Museum, London

3D
Scan The World
3,585 views 220 downloads
Community Prints Add your picture
Be the first to share a picture of this printed object
0 comments

Athlete or Hero at The British Museum, London

This powerfully built young man stands in a self-assured pose, his garment thrown over ne shoulder. His identity is uncertain. He might be an athlete, as the slightly swollen ears would be appropriate for a boxer or a pankratiast (all-in-wrestler). Alternatively he could be a figure from Greek mythology, perhaps the god Hermes, or a legendary hero such as Achilles.

Greek gods and heros were often credited with major athletic feats and sporting skills so they tended to be represented with athletic physiques. There are other versions of the figure, suggesting that it is based on a Greek original rather than being an original creation from the Roman period. Stylistically the statue has features belonging to both the 5th and 4th centuries BC. 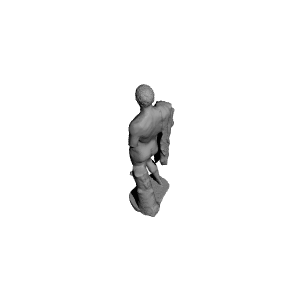 ×
0 collections where you can find Athlete or Hero at The British Museum, London by Scan The World