Fragment of Diadoumenos at The Louvre, Paris

3D
Scan The World
2,593 views 192 downloads
Community Prints Add your picture
Be the first to share a picture of this printed object
0 comments

Fragment of Diadoumenos at The Louvre, Paris

This marble fragment of a sculpture is known as the Diadoumenos, literally translating to 'someone who attached a headband around the front', a practice done by those after a victory in an athletic contest. It is a first-century A.D. Roman copy of a Greek bronze original dated around 430 B.C. The original bronze probably stood in a sanctuary such as that at Olympia or Delphi, where games were regularly held. Ancient literary accounts (Lucian, Philopseudes, 18; Pliny, N.H. xxxiv, 15) and over forty known copies attest to the original bronze being one of the most highly esteemed creations of Polykleitos, the renowned Greek sculptor from Argos who worked during the mid—fifth century B.C. Both in his sculpture and in a written text, the Canon, Polykleitos sought to represent the nude male figure with perfect harmony among all parts and according to principles that could be reproduced by others. He carefully designed his figures with special attention paid to bodily proportions and stance, so that the effect of the whole is singularly harmonious. The thorax and pelvis of the Diadoumenos tilt in opposite directions, setting up rhythmic contrasts in the torso that create an impression of organic vitality. The position of the feet poised between standing and walking give a sense of potential movement. This rigorously calculated pose, which is found in almost all works attributed to Polykleitos, became a standard formula used in Greco-Roman and, later, western European art.

It is a beautiful model, there are some supports, but support cleaning process is safe.Enjoy your print. 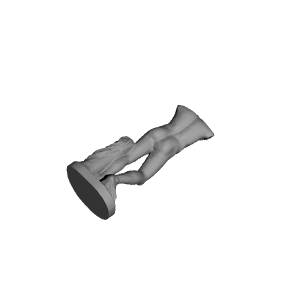 ×
0 collections where you can find Fragment of Diadoumenos at The Louvre, Paris by Scan The World