Atlante Satyres in The Louvre, Paris

3D
Scan The World
5,978 views 457 downloads
3 collections
Community Prints Add your picture
Be the first to share a picture of this printed object
0 comments

Atlante Satyres in The Louvre, Paris

These statues belong to a group of four characters similar to those found in the theater of Dionysos in Athens. Lavishly restored, transformed into medium bowl and set in the open air, in the eighteenth century they counted among the most famous pieces of the Villa Salaria Cardinal Albani (1692 - 1779): several contemporary painters , including Hubert Robert, created reproductions of them. A reduction in the basin was part of especially in Sevres porcelain of Napoleon at the Tuileries. At the Louvre , they were integrated into a stunning gallery in the hall of the Tiber. That is why they were exchanged in 1815 against four caryatids of the Mazarin collection, which were sold by the commissioner of Prince Albani in Munich. 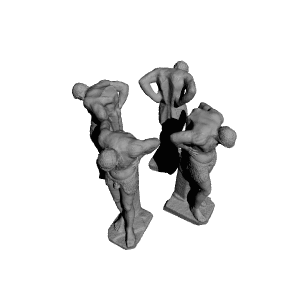 ×
3 collections where you can find Atlante Satyres in The Louvre, Paris by Scan The World