In Greek mythology, Atlas  was the Titan who held up the sky. Atlas and his brother Menoetius sided with the Titans in their war against the Olympians, the Titanomachy. When the Titans were defeated, many of them (including Menoetius) were confined to Tartarus, but Zeus condemned Atlas to stand at the western edge of Gaia (the Earth) and hold up The Heavens on his shoulders, to prevent the two from resuming their primordial embrace. Thus, he was Atlas Telamon, "enduring Atlas," and became a doublet of Coeus, the embodiment of the celestial axis around which the heavens revolve. A common misconception today is that Atlas was forced to hold the Earth on his shoulders, but Classical art shows Atlas holding the celestial spheres, not a globe; the solidity of the marble globe borne by the renowned Farnese Atlas may have aided the conflation, reinforced in the 16th century by the developing usage of atlas to describe a corpus of terrestrial maps.

One of the Twelve Labors of the hero Heracles was to fetch some of the golden apples which grow in Hera's garden, tended by Atlas' daughters, the Hesperides, and guarded by the dragon Ladon. Heracles went to Atlas and offered to hold up the heavens while Atlas got the apples from his daughters. Upon his return with the apples, however, Atlas attempted to trick Heracles into carrying the sky permanently by offering to deliver the apples himself, as anyone who purposely took the burden must carry it forever, or until someone else took it away. Heracles, suspecting Atlas did not intend to return, pretended to agree to Atlas' offer, asking only that Atlas take the sky again for a few minutes so Heracles could rearrange his cloak as padding on his shoulders. When Atlas set down the apples and took the heavens upon his shoulders again, Heracles took the apples and ran away. In some versions, Heracles instead built the two great Pillars of Hercules to hold the sky away from the earth, liberating Atlas much as he liberated Prometheus.

Bruno D'Arcevia is a painter "Mannerist", as pertaining to one of the founders of the New Italian way, the artistic movement born in the early eighties in the context of the Trans, in collaboration with the critic Giuseppe Gatt, with the primary objective to recover the great tradition of painting Renaissance and techniques of the sixteenth-century Mannerism. The crisis of representation, the historical avant-garde to the latest trends in post-conflict suggests an abundant group of Italian artists a sort of return to the profession of painting, the use of brushes and traditional materials, promoting a renewed and fruitful artistic season where the '"invention" does not ignore the quality of the product. Painting techniques which it uses are typical of the great tradition, from oil on canvas to engraving with etching, until the fresco, while the recurring themes are classic, from mythology to religious subjects. Among the most prominent interpreters of contemporary art, he exhibited in Rome at the Galleria Apollodoro Paul Portuguese, who becomes the meeting place and the main reference point of the movement neomanierista.

It is beautiful sculpture but it is difficult to clean supports especially under legs. Other places easy to clean, there are no risk to brake any part during the support cleaning process. Enjoy your print. 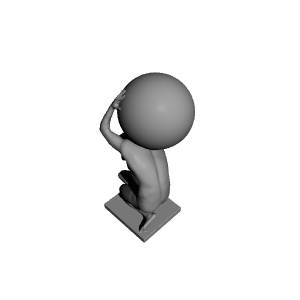 ×
18 collections where you can find Atlas in Arcevia, Italy by Scan The World
×
Angel Spy
@Angel Spy
3
Printed on: Prusa i3 MK3
Material: PLA
Posted at: 02nd July 2022

nice one, around 15 cm height

Failed print - something new created using a 3D pen and some inspiration. Nature is holding the faith of earth. I always wondered how sculpts would look like if painted. This started when I was told that the sculpts in the metope of Parthenon where painted and what remains today is the decoloured marble after many ages.