Attic sarcophagus in the form of a couch

3D
Scan The World
2,013 views 66 downloads
Community Prints Add your picture
Be the first to share a picture of this printed object
0 comments

Attic sarcophagus in the form of a couch

Found in Athens. The sarcophagus was used twice. A reclining married couple was originally depicted on the lid, which has the form of a mattress. When economic difficulties dictated its reuse at a later date, the male figure was cut back and replaced by a group of papyrus scrolls (byblos), and the female head was replaced by a head of a man. 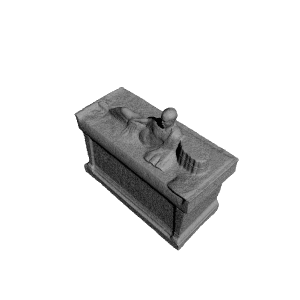