Auguste Mariette at The Louvre, Paris

3D
Scan The World
3,022 views 108 downloads
Community Prints Add your picture
Be the first to share a picture of this printed object
0 comments

Auguste Mariette at The Louvre, Paris

Auguste Mariette, in full Auguste-Ferdinand-François Mariette   (born Feb. 11, 1821, Boulogne, Fr.—diedJan. 19, 1881, Cairo), French archaeologist who conducted major excavations throughout Egypt, revealing much about the earlier periods of Egyptianhistory. Mariette joined the Egyptian department of the Louvre in 1849 and in the following year traveled to Egypt to obtain ancient manuscripts. Instead, he began excavating at Ṣaqqārah, an area that included part of the burial grounds of ancient Memphis. There he unearthed the Avenue of the Sphinxes and the Serapeum, a temple containing the tombs of sacred bulls, making Ṣaqqārah a focus for archaeological study. He remained in Egypt four years, continuing excavations and dispatching most of what he found to the Louvre, where he became curator upon his return to France. Accepting the position of conservator of monuments from the Egyptian government, Mariette in 1858 settled in Egypt, where he remained for the rest of his life. He eliminated unauthorized excavation, thereby securing a virtual monopoly on archaeological investigation, and he restricted the sale and export of antiquities in order to preserve new discoveries for the Egyptian nation. In 1859 Mariette succeeded in persuading the Ottoman viceroy of Egypt to establish a museum at Būlāq, near Cairo, to house what became the world’s foremost repository of Egyptian antiquities, theEgyptian Museum.

Among his discoveries was one of the finest examples of Egyptian temple architecture, the temple of Seti I. He also studied the pyramid fields of Ṣaqqārah and the burial grounds of Maydūm, Abydos, and Thebes. He unearthed the great temples of Dandarahand Edfu and carried out excavations at Karnak, Dayr al-Baḥrī, Tanis, and, in the Sudan, Jabal Barkal. Under his direction the great Sphinx was bared to the rock level; the wall paintings found in a tomb at Ṣaqqārah provided a detailed panorama of life in the Old Kingdom (c. 2575–c. 2130 bc). His published works include Abydos (1869), Aperçu de l’histoire d’Égypte (1874; “Survey of the History of Egypt”), and Les Mastabas de l’Ancien Empire (1889, ed. by Gaston Maspero; “The Mastabas of the Old Kingdom”). Mariette also suggested the plot for Giuseppe Verdi’s opera Aida.

Printed by PRINT3Dforum.com Printing Services - Some support required. Other than that, pretty straightforward print. 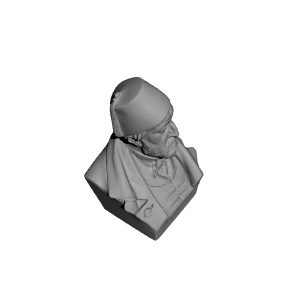 ×
0 collections where you can find Auguste Mariette at The Louvre, Paris by Scan The World