3D
Scan The World
2,088 views 188 downloads
1 collection
Community Prints Add your picture
Be the first to share a picture of this printed object
0 comments

This autopsied skull is from a male gorilla called Samson who was captured in the wild in the early 1960s and was originally at the Buffalo Zoo. In 1980, he was loaned to Chicago’s Brookfield Zoo for breeding.He had a stroke and was euthanized in Spring 1988. The autopsy revealed that he had a large tumor. Two of Samson’s five offspring are still alive. Kwizera, a female, is at the Memphis Zoo and was born shortly before Samson’s death on March 11, 1988. Kwisha, a male, was born April 28, 1988 in the Toledo Zoo after Samson’s death. Thanks to Dr. Robert Feranec of the New York State Museum for this information. The skull was 3D scanned with a Go!Scan 50 on June 1, 2018. Museum specimen ZM 3922. Courtesy of the New York State Museum

This object is scanned by Virtual Curation Lab 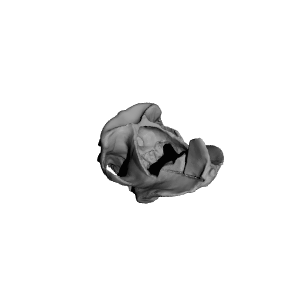 ×
1 collections where you can find Autopsied Gorilla Skull by VCL