3D
Scan The World
3,373 views 308 downloads
Community Prints Add your picture
Be the first to share a picture of this printed object
0 comments

This sculpture is by Albert-Ernest Carrier-Belleuse (June 12, 1824 – June 4, 1887) and he began his training as a goldsmith's apprentice. His career is distinguished by his versatility and his work outside France: in England between 1850 and 1855 (working for Mintons), and in Brussels around 1871. His name is perhaps best known because Auguste Rodin worked as his assistant between 1864 and 1870. The two travelled to Brussels in 1871, and by some accounts Rodin assisted Carrier-Belleuse's architectural sculpture for the Brussels Stock Exchange. He was also made artistic director at the Manufacture nationale de Sèvres in 1876. His work encompassed all manner of sculptural subjects and materials, and his naturalism incorporated a breadth of styles: unembellished Realism, neo-Baroque exuberance, and Rococo elegance. 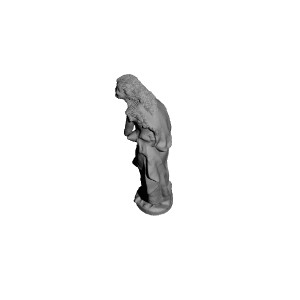 ×
0 collections where you can find Autumn at the Palais des Beaux-Arts de Lille, France by Scan The World