Avalokiteshvara at The British Museum, London

3D
Scan The World
4,301 views 232 downloads
1 collection
Community Prints Add your picture
Be the first to share a picture of this printed object
0 comments

Avalokiteshvara at The British Museum, London

Bodhisattvas appear similar to Buddhas, but with more varied postures, dress and ornament, and often with multiple arms and heads like Hindu images. Avalokiteshvara is the bodhisattva of compassion, a saviour deity very popular in the Himalayas. In Tibet the Dalai Lama is believed to be an incarnation of Avalokiteshvara. Images of Avalokiteshvara can often be identified by the presence of a small figure of the Buddha Amitabha seated with his hands in meditation, in his head-dress.

The right hand of this image is in the gesture of charity (varadamudra). His left hand is empty but may have been intended to hold a lotus. Avalokiteshvara often carries a lotus, hence another name for him: Padmapani or 'the Lotus-holder'.

This very large image was made in gilded bronze in several pieces. Rivets above the waist and above the elbows hold the figure together. Semi-precious jewels are inset in the necklace, belt, anklets and in the forehead in the Nepali manner. Many images made in Nepal were carried to Tibet and further afield. 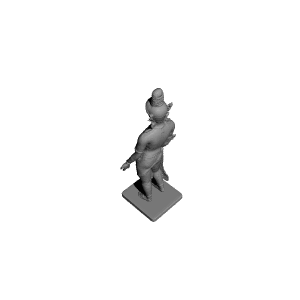 ×
1 collections where you can find Avalokiteshvara at The British Museum, London by Scan The World