Of the many manifestations of the bodhisattva Avalokiteshvara, perhaps none was more prevalent in East Asia than the uniquely Chinese form known as “Water-Moon Avalokiteshvara,” which later also spread to Korea and Japan. This form of the bodhisattva presides over his own paradise, Potolaka, which is described in scripture as a rugged seaside cave from which Avalokiteshvara could admire the reflection of the moon in the water. Appropriately, he appears meditative and relaxed and is seated informally in the “royal-ease” posture. Ornately dressed, with silk robes, fluttering sashes, jewellery, and an elaborate hairstyle, he also wears a headpiece that features an image of Amitābha, the Buddha to whom Avalokiteshvara attends. Believers might look to a sculpture like this as a guide for their own journeys toward enlightenment. 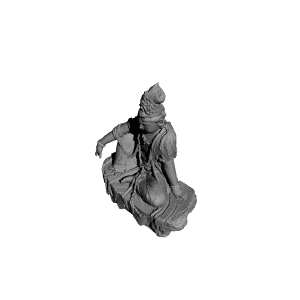 ×
3 collections where you can find Avalokiteshvara Bodhisattva in the Water-Moon Form (Shuiyue Guanyin) by Scan The World
×
Noel Page
@npagega
2
Printed on: Creality Ender 3
Material: PLA
Posted at: 16th October 2021

Still have a bit of cleanup to do but very happy with the build.