This is a small copy of the Aztec sun stone.

The Aztec sun stone (Piedra del Sol in Spanish) is a late post-classic Mexica sculpture housed in the National Anthropology Museum in Mexico City, and is perhaps the most famous work of Aztec sculpture. The stone is 358 cm in diameter and 98 cm thick, and it weighs about 21.8 tonnes. Shortly after the Spanish conquest, the monolithic sculpture was buried in the Zócalo, the main square of Mexico City. It was rediscovered on 17 December 1790 during repairs on the Mexico City Cathedral. Following its rediscovery, the sun stone was mounted on an exterior wall of the Cathedral, where it remained until 1885. Early scholars initially thought that the stone was carved in the 1470s, though modern research suggests that it was carved some time between 1502 and 1521. 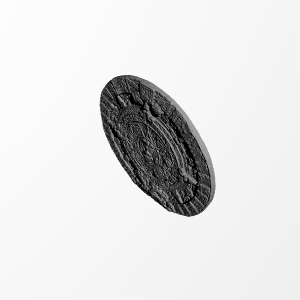 Imported nicely, be aware that the bottom of the print is not level to the coordinate system, you will need to adjust it a bit. Printed very nicely, would need to be larger than 100mm for a .4mm nozzle to bring out the details, much of the fine detail was lost in my print. No issues with printing. Print settings: 100mm diameter .1mm layer height .4mm nozzle

Loved it! Printed with 90mm diameter, 0.15mm layer height but 0.4mm nozzle. I scaled up the Z axis a little to increase depth.

Isn't it so cool being able to print and hold something historical like this? I've also done a time lapse video here - https://youtu.be/IEoNUQLwVfA Thank you so much for providing the files for free, it's incredible.

This model really is incredible. Love being able to hold something of such historical importance. I also did a quick time lapse video of the print here - https://youtu.be/IEoNUQLwVfA