Arguably the most feared spacecraft of the mercenary incursions, the Corsairhawk formed the backbone of the most powerful mercenary strike groups. While not capable of conventional dogfighting, the bombers mounted considerable forward firepower both of internal ordnance and energy weapons, supplemented by external ordnance on the wings. The B-117 hit the sweet spot between speed, firepower, and durability - fast enough to outpace most gunships, with enough firepower to threaten small capital ships, and tough enough to hold out against light fighters even without escorts. Six times the League attempted to ban their manufacture or importation into the war zones, but every time private companies or smugglers circumvented their actions. While the end of the conflict had many causes, some point to the eventual shortage of the Hades range of torpedoes carried by so many Corsairhawks as a deciding factor in turning the tide. 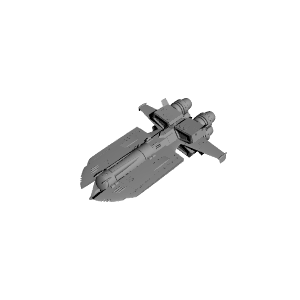