3D
Scan The World
2,127 views 145 downloads
3 collections
Community Prints Add your picture
Be the first to share a picture of this printed object
0 comments

Established sculptor and stone carver Michael Cooper presented his first major solo show in London which included previously unseen characters from his truly wonderful, personal menagerie. Cooper’s carving technique means that mass and gravity are ever present in the characterful animals he depicts. Indeed the essential character of his subjects are allowed to materialise through the slow process of chipping away at blocks of intractable stone. Irresistibly tactile, Cooper’s surfaces attract the sense of touch as much as the visual caress. 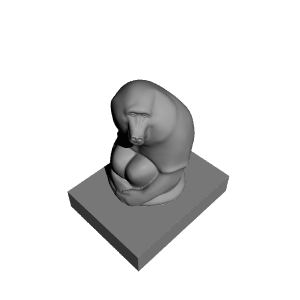 ×
3 collections where you can find Baboon by Scan The World