3D
Scan The World
3,377 views 250 downloads
1 collection
Community Prints Add your picture
Be the first to share a picture of this printed object
0 comments

'Bacchante': This standing figure was purchased in 1931 in bronze in 1928 by the Royal Museums of Fine Arts of Belgium and is thus also be viewed there. Especially in the hairstyle you recognize the hand of the wood carver who makes small decorations and details like the chisel was used.

'Grace': Like 'Bacchante' this in 1917 in typical Art Deco recognizable in her finery and ornaments elaborated. The image is part of the sculpture "Three Graces", which meant the breakthrough for Wijnants. In the picture group detaillistisch elaborate hairstyles fall immediately. The sculpture group is drawn in Malines to the Haverwerf.

Ernest Wijnants emerges very young and talented carver when he was a young man serving in the furniture industry. At twenty years old he was already foreman. He touches he befriended fellow townsman, sculptor, painter and uncle Rik Wouters. His whole work is a tribute to the woman. He sings about her thinness, sensuality, opulence, fertility. He cares less about the details than the aesthetics, sometimes with a touch of exoticism. His style reflects the pure, silent figures of George Minne and the Gothic sculpture.

WIJNANTS Ernest (1878-1964)
Wood carver in Mechelen furniture. Training in the Academy in Mechelen from 1906 in Brussels. First solo exhibition in 1911 in Brussels. In 1926 was appointed professor at the Academy of Fine Arts in Antwerp. From 1931 teacher at the National Higher Institute of Fine Arts in Antwerp. Receive awards, including the "Prize Edmond Picard (1926) and the" Grand Prix of Plastic Arts "(1938). Design in 1936, the coin of one franc in circulation until 1952. Is a member of the Royal Flemish Academy for Sciences, Literature and Fine Arts (1938) and exhibited extensively at home and abroad.
Art in the City - June 15, 1991 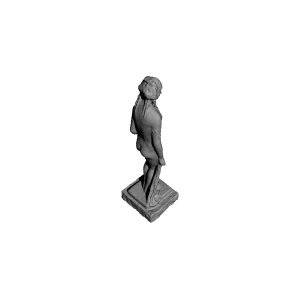 ×
1 collections where you can find Bacchante (Gratie) at Sint-Niklaas, Belgium by Scan The World