3D
Scan The World
2,734 views 189 downloads
1 collection
Community Prints Add your picture
Be the first to share a picture of this printed object
0 comments

Ariadne was the immortal wife of the wine-god Bacchus.

There were several versions of her story. In one, Ariadne, a daughter of King Minos of Krete (Crete), assisted Theseus in his quest to slay the Minotauros (Minotaur) and then fled with the hero aboard his ship. When they landed on the island of Naxos Theseus abandoned her as she slept. It was then that Bacchus discovered her and made her his wife. Some say she was later slain by the goddess Artemis or else ascended to Olympos with her husband as an immortal.

According to others Ariadne's bridal with Bacchus occurred several generations before this when the god was still travelling the earth spreading his cult. During his war against Argives with a band of sea-women, Ariadne was slain or turned to stone by King Perseus. The god descended into the underworld to recover her and brought her back with him to Olympos. 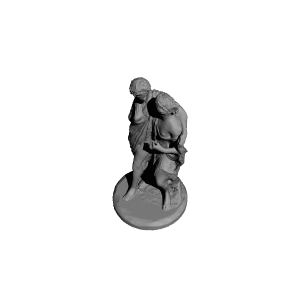