3D
Scan The World
1,345 views 28 downloads
Community Prints Add your picture
Be the first to share a picture of this printed object
0 comments

From the end of the 19th century, four “stone women” stood in the University Grove - ancient statues brought from Altai and Kazakhstan. However, in the 1980s, during repair work, the largest of them broke the tractor. Employees of the laboratory of interdisciplinary archaeological research "Artifact" began the reconstruction of a broken stone sculpture. It is planned that it will again appear in the grove by the beginning of summer.

Stone figures were brought by professors Vasily Florinsky and Vasily Sapozhnikov at the end of the 19th century. Each sculpture is over a thousand years old. Such statues began to be erected since 6th century on the territory of the First Turkic Kaganate - a powerful empire that spread from Korea in the east to the Crimea in the west. Stone idols personified people who once lived: military nobility, rulers, rich people who were worshipped by their descendants. Before Tomsk, these stone sculptures were tombstones (the term “stone woman” was derived from the Turkic word “balbal”, which means “sculpture”).

In the University grove until the 1980s, there were four statues, three of which were brought from Kazakhstan, and the fourth from Altai. The largest of them was brought from Almaty and depicted a man sitting in a lotus position and holding a bird in his hands. In 1986, during repair work, the tractor broke this statue in half.

Employees of the Artefact laboratory of interdisciplinary archaeological research won the Third Grant Competition of the University’s initiative projects and plan to repair the broken statue and return it to its former place in the grove. Nearby archaeologists will put a sign describing the idols.

“This is a unique case when such statues are in the courtyard of a university,” says Evgeny Vodyasov, an employee of the Artifact laboratory. - In Russia, this is nowhere else. We want to install a stone tablet next to it, with the help of which we will explain what idols are, when they appeared here, what they depict. Many people simply do not know that these statues are more than a thousand years old, and therefore they are not as carefully treated as they deserve.

The height of the "stone woman", which is reconstructed by archaeologists, is about 160 centimetres. The idol weighs over 500 kilograms. Work historians plan to spend about a month. Already in late May - early June, a fourth idol will appear in University Grove, it will be located in the northern part of the grove, in the same place where two more statues now stand. 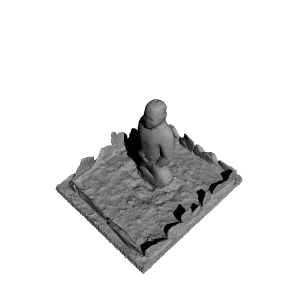