3D
Featured Scan The World
2,275 views 102 downloads
1 collection
Community Prints Add your picture
Be the first to share a picture of this printed object
0 comments

The Ballcourt II had central markers on the axis of its court. Each marker was then covered with a carved disk corresponding to the construction of the ball game.This carved disc was the one that covered the central marker.

The scene is framed by the entrance to a cave in the shape of 4 petals and shows 18 Rabbit Uaxaklahun Ubah Kawil on the left. Opposite is the God of Number Zero, one of the deities of the underworld. 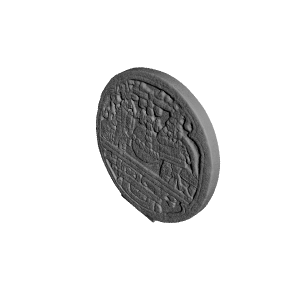