3D
Support Free Scan The World
1,622 views 75 downloads
3 collections
Community Prints Add your picture
Be the first to share a picture of this printed object
0 comments

Although commonly referred to as 'yokes', these magnificently sculpted objects were used as moulds for shaping the protective leather waist belts worn by ball game players. The dense, non-porous, highly polished stone provided an ideal base upon which to fashion the wet leather. When dry, the belt was stuffed with softer material (perhaps kapok from the ceiba tree, or cotton), and then secured around the waist to cushion the impact of the heavy rubber ball. The belt was charged with symbolic significance: the creature depicted on it is a toad - a zoomorphic representation of the earth. With the belt at mid-body, the player stood in the navel of the toad at the threshold to the underworld. The ball-court itself was a carefully circumscribed sacred space and an entrance to the spirit world. Political rivalries were settled in certain ball-game contests which ended in sacrifice by decapitation. 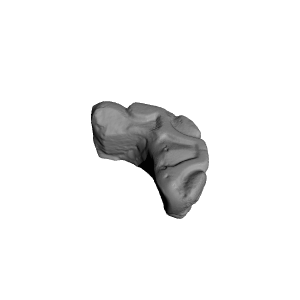 ×
3 collections where you can find Ball game belt at The British Museum, London by Scan The World