3D
Scan The World
2,152 views 157 downloads
2 collections
Community Prints Add your picture
Be the first to share a picture of this printed object
0 comments

The Mesoamerican ballgame was a sport with ritual associations played since 1400 BC by the pre-Columbian peoples of Ancient Mesoamerica. The sport had different versions in different places during the millenniums.
In the Postclassic period, the Maya began placing vertical stone rings on each side of the court, the object being to pass the ball through one, an innovation that continued into the later Toltec and Aztec cultures.
The dedication date and name and title of its patron was carved on this sculpture. The text reads: “in 9.12.2.?2, 8 lk’ 13 ? ... the carving of the stone ring of B’ate 1 … Kalomte’ was rounded in the company of infants … the Prince of the Earth … was put in order.” 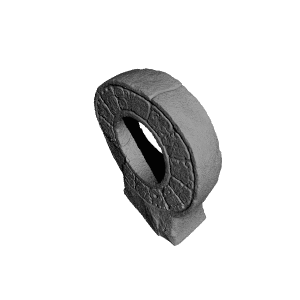