Base for a flagpole

3D
Scan The World
2,515 views 190 downloads
4 collections
Community Prints Add your picture
Be the first to share a picture of this printed object
0 comments

Base for a flagpole

The museum bought two copies of the socket in 1863 for the sum of £410. An inscription on the original records that it was commissioned for St. Marks sqaure in Venice, where it still stands outside the Doge's Palace. This socket was created by Alessandro Leopardi.

Electrotype Copy of a socket for a standard, after the bronze original in the Piazza di S. Marco, Venice. One of three flagstaffs commissioned from Leopardi by Doge Leonardo Loredan (reigned 1501-21). The latter's portrait appears in four medallions on the flagstaff. The flagstaff shows the winged lion of St. Mark, the emblem of the Venetian Republic, and around the base are seascapes with classicizing figures. Here, allegorical figures of Wisdom, Charity and Justice are shown riding above the waves with attendants. 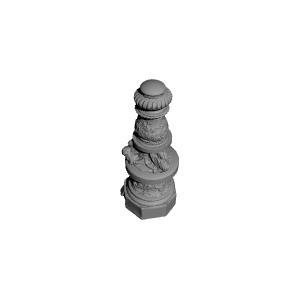