3D
Scan The World
6,718 views 842 downloads
9 collections
Community Prints Add your picture
Be the first to share a picture of this printed object
0 comments

Designed to catch water from a wall fountain, this basin was set into a façade or niche. Its back and parts of the sides are therefore unfinished. The coat of arms displayed in the shield has been identified as that of the Codognola, a noble family of Verona.

Basin of a wall fountain in Istrian stone. The front and sides of the upper half of the basin are carved with arabesques, which issue from the mouths of two grotesque heads on the front corners and terminate at the sides in lion heads holding a ring. The front displays a shield (a lion rampant, debruised by a bend charged with three cinquefoils). the gadrooned lower half of the basin curves inwards, and is supported at the front by two legs in the shape of lion paws. The back and the rear part of the sides are left untreated. The lip of the left side has been chipped and repaired at the back. Vertical break through the right leg.

Purchased in Florence. A report on the object made at the time of acquisition and now in the museum's archives reads as follows: "The basin of a fountain of carved grey marble - the outside is warm in colour but the inside has been re-chiselled by some one who thought of using it as a bath and that is of a cool grey. It is meant to be placed against a wall - one side not being finished." Pope-Hennessy noted that parts of the sides are also left rough indicative that the basin was set into a wall. The arms on the front of the basin have been tentatively identified as those of the Codognola of Verona or Lion of Venice. Pope-Hennessy dates the basin to the second half of the sixteenth century. 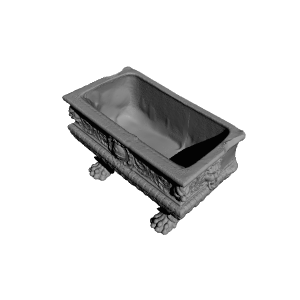