Contrary to it's name, Beacon Hill Castle isn't really a castle: it's a monument and toposcope with stunning views from atop Lickey Hills just south of Birmingham in the English midlands. It's a popular area for outdoor relaxation and recreation for people in nearby Longbridge, Rednal, Rubery and Lickey and the 'castle' was erected in 1907 to commemorate the gifting of the land to the people of Birmingham by the Cadbury family (yes, the famous chocolate makers whose Cadbury factory can still be found a couple of miles north in Bournville).

A small plaque on the wall, to the left of the steps, reads "In 1907 three brothers Edward, George Jnr. and Henry Cadbury gave Beacon Hill to The City of Birmingham to protect the countryside and for people's enjoyment".

A plaque in front of the castle reads "Originally erected to commemorate the gift of this hill to the City of Birmingham in 1907 by Edward, George Jnr. & Henry Cadbury for use by the people of the City for leisure health and recreation. Restored and refurbished 1987-1988 by the MANPOWER SERVICES COMMISSION and BIRMINGHAM CITY COUNCIL DEPARTMENT OF RECREATION AND COMMUNITY SERVICES as an M.S.C. community project with support from the families of: EDWARD CADBURY and GEORGE CADBURY JNR."

The 3D model was created by first taking accurate measurements using a Bosch bluetooth-enabled LASER distance meter and the excellent Android ImageMeter app for drawing the measurements onto photos. The measurements were then used to create outlines of the main building blocks in LibreCAD, which were used, after linear extrusion, to add and subtract material in OpenSCAD which exported the completed STL file included here. The example 3D prints were made using a Monoprice Mini SLA resin printer, although it should also print well, with no or minimal support material, on more common fused filament printers. 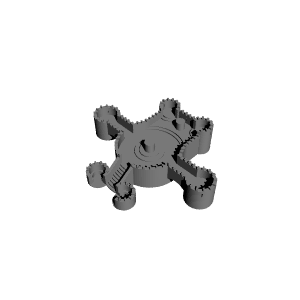