3D
Scan The World
1,572 views 40 downloads
Community Prints Add your picture
Be the first to share a picture of this printed object
0 comments

This bear figurine has a suprisingly bloody history. In 18th century Europe, bear baiting was a popular past time, and bears were common sights in public, as well as objects of popular fascination. A whole range of bear themed wares was produced, everything from jugs, to vases, to plates, to statues. Bears were big business, and the suffering of the animals was entirely unconsidered.
This item was produced in Nottinghamshire, at the time the centre of English pottery. By coincidence, both bear baiting and English potting declined at the same time; in the 19th century the cruelty of bear baiting was finally accepted, and the practice banned. Meanwhile, domestic taste moved from English made goods to cheaper, more exotic items from continental Europe.
Show more Show less
License
Printing Details 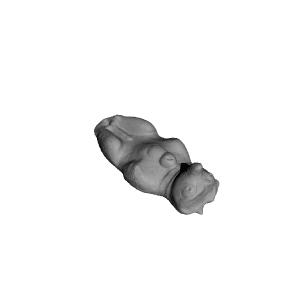