3D
Scan The World
2,512 views 209 downloads
1 collection
Community Prints Add your picture
Be the first to share a picture of this printed object
0 comments

Beatrice "Bice" di Folco Portinari (1266–1290) was a Florentine woman who has been commonly identified as the principal inspiration for Dante Alighieri's Vita Nuova, and is also commonly identified with the Beatricewho appears as one of his guides in the Divine Comedy (La Divina Commedia) in the last book, Paradiso, and in the last four cantos of Purgatorio. There she takes over as guide from the Latin poet Virgil because, as a pagan, Virgil cannot enter Paradise and because, being the incarnation of beatific love, as her name implies, it is Beatrice who leads into the Beatific vision.

Scholars have long debated whether the historical Beatrice is intended to be identified with either or both of the Beatrices in Dante's writings. She was apparently the daughter of the banker Folco Portinari, and was married to another banker, Simone dei Bardi. Dante claims to have met a "Beatrice" only twice, on occasions separated by nine years, but was so affected by the meetings that he carried his love for her throughout his life. 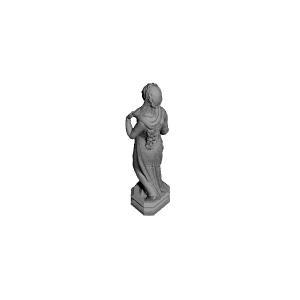 ×
1 collections where you can find Beatrice at The Musée des Beaux-Arts, Lyon by Scan The World