3D
Scan The World
5,246 views 314 downloads
Community Prints Add your picture
Be the first to share a picture of this printed object
0 comments

This statue of Bela Bartok is just a hungred yards or so away from the entrance to South Kensington Tube station. The text of the plaque on the railings beside the statue reads- 1881-1945. Hungarian composer by the award-winning sculptor Imre Varga. Erected by the Peter Warlock society in conjunction with the Hungarian Cultural Centre in the year of "Magyar Magic-Hungarian focus 2004".

It was the English composer Peter Warlock who was instrumental in bringing Bartok to London for the first time in 1932. From then until 1937 Bartok always stayed in London with Sir Duncan and Lady Wilson at 7 Sydney Place, 230 yards in front of the statue, where an English Heritage Blue Plaque commemorates his visits. 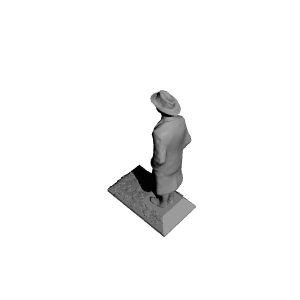 ×
0 collections where you can find Bela Bartok in South Kensington, London by Scan The World