3D
360°
2,916 views 86 downloads
1 collection
Community Prints Add your picture
Be the first to share a picture of this printed object
0 comments

In Collaboration with Portuguese artist Carlos Faustino, we bring you this model that is part of the collection #statuemeltdown to raise consciousness about global warming through an artistic exaggeration of how rising temperatures affect historical works of art and landmarks.

Faustino took our existing Belem Tower model (mmf.io/o/72956) and applied fluid simulation to achieve the melting effect. This is the first building he includes in his collection. To see more of his work, visit and follow:

About the Belem Tower: a fortified tower located in the municipality of Lisbon, capital of Portugal. It is a UNESCO World Heritage Site because of the significant role it played in the Portuguese maritime enterprises during the Age of Discoveries. The tower was commissioned by King John II to be part of a defence system at the mouth of the Tagus river and a ceremonial gateway to Lisbon. The tower was built in the early 16th century and is a prominent example of the Portuguese Manueline style, but it also incorporates hints of other architectural styles, such as moorish (Wikipedia).

MiniWorld is excited to bring this charming model to life. It was modeled from scratch by hand and brain in Autodesk Fusion 360 by collaborator Brian Mauricio Sánchez, no scanning or workarounds!  Please give credit, it's all about spreading culture and education. 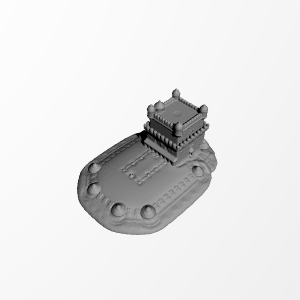 ×
1 collections where you can find Belem Tower (Melting) by MiniWorld