Belisarius and his guide

3D
Scan The World
2,281 views 99 downloads
Community Prints Add your picture
Be the first to share a picture of this printed object
0 comments

Belisarius and his guide

Flavius Belisarius (505-565 CE) was born in Illyria (the western part of the Balkan Peninsula) to poor parents and rose to become one of the greatest generals, if not the greatest, of the Byzantine Empire. Belisarius is listed among the notable candidates for the title of `Last of the Romans’ by which is meant the last individual who most perfectly embodies the values of the Roman Empire at its best. He seemed to understand completely when it was necessary to strike and when it was more prudent to heal.

He first enlisted in the army under the Byzantine Emperor Justin I and, upon that emperor’s death, his successor, Justinian I, awarded Belisarius full command of the army. He put down the Nika uprising in Constantinople in 532 CE, the result of resentment against Justinian I, slaughtering between twenty and thirty thousand people. The rebellion crushed, Justinian then sent him against Persia in 533 CE. A series of brilliant victories followed as Belisarius deployed his forces and maneuvered his strategies in ways unfamiliar to the Persian forces and so ably defeated them.

Justinian recalled Belisarius, made peace with the Persians, and then sent Belisarius to win back African provinces to the empire. The Vandals had conquered the African provinces of the former Roman Empire, but in time the populace had reverted back to Roman ways. Still, the lands were not governed by the empire and, therefore, were not generating revenue for Justinian. In 533 CE, Belisarius embarked with 5,000 cavalry, decimated the Vandal power in only a few months and restored the provinces to Byzantine rule. Carthage, and the other former African provinces of imperial Rome, would remain under Byzantine control until the Muslim conquest.

In 535 CE Belisarius was sent against the Ostrogoths in Italy and, again, won a number of stunning victories. He took Sicily first in 535 CE and then Naples and Rome in 536 CE and finally in 539 CE (540 CE according to some sources) Ravenna, securing the King Witigis as prisoner. Justinian then offered the Goths his terms which, in Belisarius’ view, were too generous: they could keep an independent kingdom and, for the trouble they had caused, would only have to surrender half of their treasury to Justinian.

The Goths trusted neither Justinian nor his terms; they did, however, trust Belisarius who had behaved honorably toward the conquered throughout the war. They answered that they would agree to the terms of surrender if Belisarius endorsed the treaty. Belisarius could not do so, however, as he believed the Goths were getting off too lightly. A faction of the Ostrogoth nobility suggested a way around this impasse by making Belisarius himself their new king. Belisarius pretended to accept their proposal but, loyal to Justinian and knowing himself an abler soldier than statesman, went along with all their preparations to crown him at Ravenna and then had the ring-leaders of the plot arrested and claimed all of the Ostrogoth Empire, and all of the treasury, in Justinian’s name.

Belisarius was again sent against the Persians but, by 545 CE, was back in Italy to quell another uprising. The Byzantine officials, whom Justinian had given governorship to, had so misused their powers that a Gothic uprising, led by a man named Baduila (known better by his nom de guerre, Totila) had thrown the region into chaos. Belisarius made his way through enemy lines to Rome, almost alone, and entered the city undetected. Belisarius re-took the city and drove Totila and his forces out. Justinian, again fearing that Belisarius might prove too popular and, therefore, a threat, recalled him and sent the general Narses to replace him in Italy. Narses succeeded in killing Totila, crushing the insurrection, and driving the Goths from Italy.

Despite Justinian’s mistrust, Belisarius again accepted the command of troops at his order and crushed the Bulgars when they attempted to invade the Byzantine Empire in 559 CE. He once again ably drove the enemy back across the border and secured the boundaries of the empire. Even after all his service to Justinian, Belisarius was accused of corruption (generally understood today as trumped up charges) and sent to prison in 562 CE.

Justinian pardoned him, however, and restored him to his previous standing and honour at the Byzantine court. A myth later grew up around this event in which Justinian had Belisarius blinded and the great general became a beggar on the streets of Constantinople. This myth, however, has no basis in historical fact even though many works of art, such as Jacque-Louis David’s painting Belisarius, have depicted it as so. Belisarius died in 565 CE, within only a few weeks of Justinian, in Constantinople. 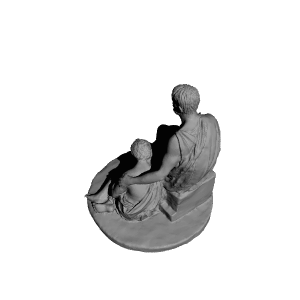