3D
Scan The World
2,163 views 81 downloads
Community Prints Add your picture
Be the first to share a picture of this printed object
0 comments

This large and heavy bell is a type local to Southwest China. Music was an essential part of court life in ancient China. Drums were in use from the Neolithic period and, with the casting of bronze, the first small bells appeared in about 1650 BC. This was the beginning of a long tradition of music making for court ceremony and ritual. Few early drums have survived as they were made of wood and skins which have rotted away. bronze bells are more common. They were cast with an elliptical section: when struck from the outside this form produced two notes. One at the mid-tip point of the lip and one at the corner. Shang bells were mounted on stands, mouth upward. At the late Shang capital Anyang, in Henan province, sets of three or five of different sizes were employed. The bell was much further developed in central southern China: here massive bells were cast and in due course bosses were added to ensure that the two different notes sounded clearly, and the bells were hung from a loop on the shaft, which enabled them to vibrate freely. These new bells were reintroduced from the south into northern centres and used in large sets at the Zhou court.

China in the 4th century BCE entered an era of constant warfare known as the Warring States period. The period saw the rapid rise of large states (such as Chu) over smaller ones thanks to technological advancement. Though the period has usually been characterized by historians as being excessively violent compared to the Spring and Autumn period it was also punctured by several cultural and social growth through the expansion of several different sects of Confucianism and Taoism. 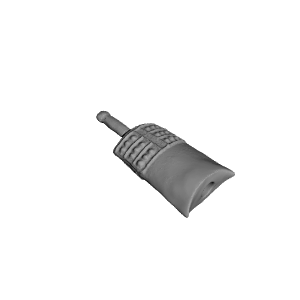 ×
0 collections where you can find Bell, Zheng at The British Museum, London by Scan The World