3D
Featured Scan The World
15,136 views 2,637 downloads
18 collections
Community Prints Add your picture
Be the first to share a picture of this printed object
5 comments

The Belvedere Torso is a fragmentary marble statue of a nude male.

The figure is portrayed seated on an animal hide, and its precise identification remains open to debate. Though traditionally identified as a Heracles seated on the skin of the Nemean lion, recent studies have identified the skin as that of a panther, occasioning other identifications (possibilities include Hercules, Polyphemus and Marsyas, among others.) According to the Vatican Museum website "the most favoured hypothesis identifies it with Ajax, the son of Telamon, in the act of contemplating his suicide".

The contorted pose of the torso and musculature were highly influential on Renaissance, Mannerist, and Baroque artists, including Michelangelo and Raphael. Michelangelo's admiration of the Torso was widely known in his lifetime, to the extent that the Torso gained the sobriquet, "The School of Michelangelo"

Legend has it that Pope Julius II requested that Michelangelo complete the statue fragment with arms, legs and a face. He respectfully declined, stating that it was too beautiful to be altered, and instead used it as the inspiration for several of the figures in the Sistine Chapel, including the Sibyls and Prophets bordering the ceiling and the risen Christ in The Last Judgement. The Belvedere Torso remains one of the few ancient sculptures admired in the 17th and 18th centuries whose reputation has not suffered in modern times. 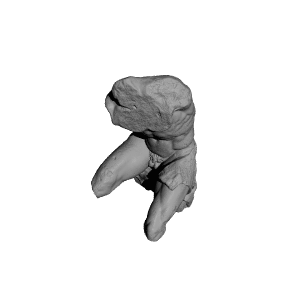