3D
Support Free Scan The World
3,268 views 103 downloads
Community Prints Add your picture
Be the first to share a picture of this printed object
0 comments

The Benin Bronzes are a group of more than a thousand commemorative metal plaques that decorated the royal palace of the Benin Kingdom in modern-day Nigeria. Collectively, the Bronzes form the best known examples of Benin art, created by the Edo people from the thirteenth century, which also included other sculptures in brass or bronze, including some famous portrait heads and smaller pieces.

In 1897, most of the plaques were removed by the British during a punitive expedition to the area as imperial control was being consolidated in Southern Nigeria. Two hundred of the pieces were taken to the British Museum in London, while the rest were purchased by other European museums. Today, a large number are held by the British Museum. Other notable collections are in Germany and the United States.

The Benin Bronzes led to a greater appreciation in Europe of African culture and art. Initially and naively, it appeared incredible to the discoverers that people "supposedly so primitive and savage" were responsible for such highly developed objects. Some even concluded that Benin knowledge of metallurgy came from the Portuguese traders who were in contact with Benin in the early modern period. Today, it is clear that the bronzes were made in Benin from an indigenous culture. Many of these dramatic sculptures date to the thirteenth century, centuries before contact with Portuguese traders, and a large part of the collection dates to the fifteenth and sixteenth centuries. It is believed that two "golden ages" in Benin metal workmanship occurred during the reigns of Esigie (fl. 1550) and of Eresoyen (1735-50), when their workmanship achieved its highest qualities.

While the collection is known as the Benin Bronzes, like most West African "bronzes" the pieces are mostly made of brass of variable composition. There are also pieces made of mixtures of bronze and brass, of wood, of ceramic, and of ivory, among other materials.

The metal pieces were made using lost-wax casting and are considered among the best sculptures made using this technique. 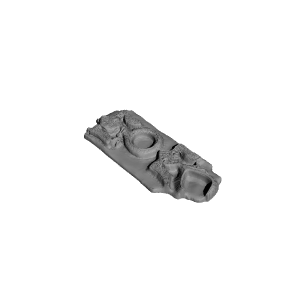 ×
0 collections where you can find Benin Plaque at The British Museum, London by Scan The World