Berenice II of Egypt in The Palace of Versailles, France

3D
Scan The World
2,946 views 262 downloads
Add to collection
2 0
Community Prints Add your picture
Be the first to share a picture of this printed object
0 comments

Berenice II of Egypt in The Palace of Versailles, France

Berenice (Ancient Greek: Βερενίκη, Berenikē) is the Ancient Macedonian form of the Attic Greek name Φερενίκη (Pherenikē), which meant "bearer of victory" from Ancient Greek φέρω (pherō), meaning "to bear", and νίκη (nikē), meaning "victory". Berenika priestess of Demeter in Lete ca. 350 BC is the oldest epigraphical evidence. The name also has the form Bernice. An additional Latin form of the same name is Veronica.

Coma Berenices is a traditional asterism that has since been defined as one of the 88 modern constellations. It is located near Arcturus, and the constellation Leo to which it formerly belonged, and contains the North Galactic Pole. Its name means "Berenice's Hair" (in Greek, viaLatin), and refers to the legend of Queen Berenice II of Egypt, who sacrificed her long hair.

Coma Berenices is one of the few constellations to owe its name to a historical figure, in this case Queen Berenice II of Egypt, wife of Ptolemy III Euergetes (fl. 246 BC–221 BC), the king under whom Alexandria became an important cultural center.

In 243 BC, during the Third Syrian War, Ptolemy undertook a dangerous expedition against the Seleucids, who had murdered his sister. His newlywed bride, Berenice, swore to the goddess Aphrodite to sacrifice her long, blonde hair, of which she was extremely proud, if her husband returned safely. He did, so she cut her hair and placed it in the goddess's temple. By the next morning the hair had disappeared. To appease the furious king the court astronomer, Conon, announced that the offering had so pleased the goddess that she had placed it in the sky. He indicated a cluster of stars that have since been called Berenice's Hair.

This incident inspired the court poet Callimachus of Cyrene to write a poem entitled Βερενίκης πλόκαμος (Greek "Berenice's braid"). About 2/3 of the Greek original is now lost, but the full version was translated to Latin by the Roman poet Catullus, and his version exists to this day.

Coma Berenices consists of a number of stars close together, and has been recognized as a distinct asterism since the Hellenistic period. Eratosthenes referred to it as both "Ariadne's Hair" and "Berenice's Hair". Ptolemy referred to it as "the lock" of hair; however, he did not list it as one of his 48 constellations, considering it to be a part of Leo, specifically, the tuft at the end of the lion's tail.

It appeared in Johann Bayer's Uranometria of 1603, and during the 17th century, a few other maps that were made of the sky followed suit.

This marble sculpture depicting Berenice was made by French sculptor Francois Lespingola (born in Joinville (Haute-Marne) in 1644, died in Paris July 18, 1705). Son of a royal official Lespingola won the first prize of the former Academic School in 1665. During his stay in Rome, he became a member of the Academy of Saint Luke (1672). Back in France, he is accredited at the Royal Academy in 1676 (with Junction of Academies of France and Rome) From 1676 he worked mainly for the Palace of Versailles. He produced many outdoor decorations for the gardens such as Berenice, Arria and Paetus and two children adorning the main fountain outside of the palace. 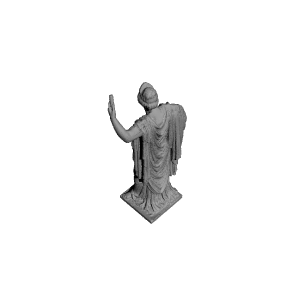 ×
0 collections where you can find Berenice II of Egypt in The Palace of Versailles, France by Scan The World