3D
360°
Scan The World
2,145 views 120 downloads
Community Prints Add your picture
Be the first to share a picture of this printed object
0 comments

Thorvaldsen and the German sculptor Christian Daniel Rauch lived door by door in Rome for long periods during the years 1805-1819. After a visit to Carrara in 1816, Rauch modelled Thorvaldsen "ad vivum", i.e. with him sitting as a live model. And the result was indeed a particularly vivid interpretation of Thorvaldsen - of his inspiring glance, his splendid hair and his characteristic profile. Rauch often emphasised Thorvaldsen's crucial importance to him. Yet, Thorvaldsen had little to say on their relationship, and neither did he possess any works by Rauch. The original model of this bust belongs to the Rauch Museum in Bad Aolsen, and another plaster copy of the sculpture can be found at The Thorvaldsens Museum which was received as a gift from Berlin in 1870. 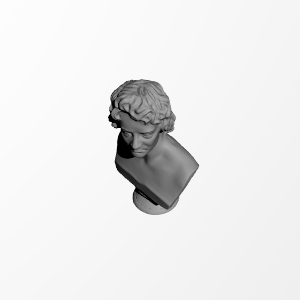