3D
360°
Scan The World
1,305 views 67 downloads
Community Prints Add your picture
Be the first to share a picture of this printed object
0 comments

Roberto Tiberio Barbarani (called Berto, 1872 – 1945) was an Italian poet. He wrote many poems in the Veronese dialect of Northern Italy and this bronze statue portraying him is placed in the margins of his beloved Piazza Erbe. The poet is facing the center of the square, looking at that statue of Madonna Verona that represents the much celebrated city in his poems.

The inscription says Voria Cantar Verona, which is the first phrase of the one of the most famous poems of Barbarani, Romeo and Juliet. It expresses the desire to tell about the city, its history, its landscape and its people. 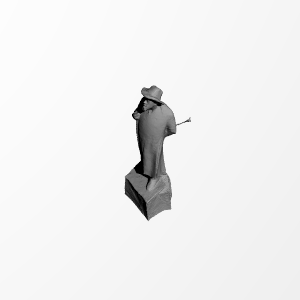