Bird in Space at The MoMA, New York

Bird in Space at The MoMA, New York

From the 1920s to the 1940s, the theme of a bird in flight preoccupied Brancusi. He concentrated on the animals’ movement, rather than their physical attributes. In Bird in Space, the sculptor eliminated wings and feathers, elongated the swell of the body, and reduced the head and beak to a slanted oval plane. Balanced on a slender conical footing, the figure’s upward thrust appears unfettered. This sculpture is part of a series that includes seven marble sculptures and nine bronze casts.  It was sold in 2005 for $27.5 million, at the time a record price for a sculpture sold in an auction. The original title in Romanian is Pasărea în văzduh.

Seven of the sculptures in the series are made of marble, while the other nine were cast in bronze. The first and best known of the series is housed in the Metropolitan Museum of Art in New York City, while two bronze casts (1928 and c.1941) reside in that city's Museum of Modern Art. Two versions of the sculpture, one bronze (1924) and one marble (1923–1924), are housed in the Philadelphia Museum of Art. A 1926 bronze is on display at the Seattle Art Museum. Two more bronze casts (1925–1926 and 1927) are on display at the Los Angeles County Museum of Art and a 1931 bronze cast is housed at the Norton Simon Museum of Art in Pasadena, California. Another bronze of unknown casting date resides in the Peggy Guggenheim Collection in Venice, Italy, and the National Gallery of Australia in Canberra owns two marbles, both c.1931-1936, one white and one black.

In 1926-27, Bird in Space was the subject of a court battle over its taxation by U.S. Customs. In October 1926, Bird in Space, along with 19 other Brâncuși sculptures, arrived in New York harbor aboard the steamship Paris. While works of art are not subject to custom duties, the customs officials refused to believe that the tall, thin piece of polished bronze was art and so imposed the tariff for manufactured metal objects, 40% of the sale price or about $230 (over $2800 in 2010 U.S. dollars). Marcel Duchamp (who accompanied the sculptures from Europe), American photographer Edward Steichen (who was to take possession of Bird in Space after exhibition), and Brâncuși himself were indignant; the sculptures were set to appear at the Brummer Gallery in New York City and then the Arts Club in Chicago. Under pressure from the press and artists, U.S. customs agreed to rethink their classification of the items, releasing the sculptures on bond (under "Kitchen Utensils and Hospital Supplies") until a decision could be reached. However, customs appraiser F. J. H. Kracke eventually confirmed the initial classification of items and said that they were subject to duty. Kracke told the New York Evening Post that "several men, high in the art world were asked to express their opinions for the Government.... One of them told us, 'If that's art, hereafter I'm a bricklayer.' Another said, 'Dots and dashes are as artistic as Brâncuși's work.' In general, it was their opinion that Brâncuși left too much to the imagination."[5] The next month, Steichen filed an appeal to the U.S. Customs' decision.

Under the 1922 Tariff Act, for a sculpture to count as duty-free it must be an original work of art, with no practical purpose, made by a professional sculptor. No one argued that the piece had a practical purpose, but whether or not the sculpture was art was hotly contested. The 1916 case United States v. Olivotti had established that sculptures were art only if they were carved or chiseled representations of natural objects "in their true proportions." Therefore, a series of artists and art experts testified for both the defense and the prosecution about the definition of art and who decides exactly what art is.

Brâncuși's affidavit to the American Consulate explained the process of creating the piece, establishing its originality:

I conceived it to be created in bronze and I made a plaster model of it. This I gave to the founder, together with the formula for the bronze alloy and other necessary indications. When the roughcast was delivered to me, I had to stop up the air holes and the core hole, to correct the various defects, and to polish the bronze with files and very fine emery. All this I did myself, by hand; this artistic finishing takes a very long time and is equivalent to beginning the whole work over again. I did not allow anybody else to do any of this finishing work, as the subject of the bronze was my own special creation and nobody but myself could have carried it out to my satisfaction.

Despite the varied opinions on what qualifies as art presented to the court, in November 1928 Judges Young and Waite found in favor of the artist. The decision drafted by Waite concluded:

The object now under consideration . . . is beautiful and symmetrical in outline, and while some difficulty might be encountered in associating it with a bird, it is nevertheless pleasing to look at and highly ornamental, and as we hold under the evidence that it is the original production of a professional sculptor and is in fact a piece of sculpture and a work of art according to the authorities above referred to, we sustain the protest and find that it is entitled to free entry.

This was the first court decision that accepted that non-representational sculpture could be considered art. 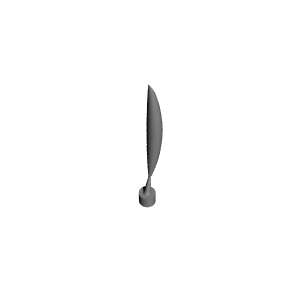 ×
13 collections where you can find Bird in Space at The MoMA, New York by Scan The World
×
Julien Boucaron
@boucaron
1
Printed on: Creality Ender 3
Material: PLA
Posted at: 22nd May 2022