Black granite statue of King Sesostris III (One of Two) at The British Museum, London

3D
Scan The World
5,135 views 150 downloads
Community Prints Add your picture
Be the first to share a picture of this printed object
0 comments

Black granite statue of King Sesostris III (One of Two) at The British Museum, London

This life-size statue of Senwosret III (1874-1855 BC) is one of three very similar statues in the British Museum collections excavated from the site of the funerary temple of King Nebhhepetre Mentuhotep II (2055-2004 BC), a predecessor of Senwosret.

Senwosret restored and endowed this temple, which was the site of an important local annual festival. It is likely that the statues were dedicated out of respect for the earlier king and the festival.

The statues, which show Senwosret in the attitude of prayer, standing with his hands flat on the front of his kilt, are the earliest examples of this devotional pose. In contrast with his youthful, muscular torso, the king's face is depicted with expressive furrows and lines. His large ears may symbolize the ruler's readiness to listen. This new style of representation, so different from the idealized portrayals of royalty in other periods, is characteristic of this reign. Contemporary poetry spoke of how the heaviest burden, that of rulership, lay on the king, and this powerfully modelled portrait seems to reflect that. The expressiveness of the portrait is royal rather than personal. One Egyptologist, T.G.H James, has described it as a 'portrait of responsible kingship'. 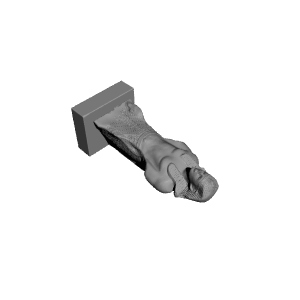 ×
0 collections where you can find Black granite statue of King Sesostris III (One of Two) at The British Museum, London by Scan The World