3D
360°
Scan The World
1,605 views 58 downloads
Community Prints Add your picture
Be the first to share a picture of this printed object
0 comments

During his long reign Ramesses II had ample time and opportunity to father over a hundred children. They appear in procession on temple walls, always the same, in the order of their birth. Mentuherkhepeshef, the prince represented here, was Ramesses II’s fifth son.

The prince sits on a high base with his legs drawn up to shoulder level and his arms crossed over his knees. His body is enveloped in a long mantle, from which only his head and hands emerge, so that the figure approximates a block or cube. The elegance and plasticity of the modeling subtly indicating the contours of the body belie the hardness of the stone. Most block statues were made for placement in temples rather than tombs; their compact form helped guard against breakage.

A closer inspection reveals that the statue has been reworked. The hieroglyphic inscriptions are clearly a later addition: the glossy smooth sides of the statue were abraded to receive the text. Also, what was originally a round headdress was recarved to represent the sidelock of youth, a mark of princely status. Either Mentuherkhepeshef usurped the statue from another individual, or else he himself revamped and updated it, perhaps to represent a change in his status.

Of Mentuherkhepeshef’s life we know little except that he was an army man - his titles include “officer for horses of the lord of the two lands [the king]” and “first charioteer of his father.” Mentuherkhepeshef never became king, for he and many of his brothers died before they could claim the throne. That lot fell to Merenptah, Ramesses’ thirteenth son. 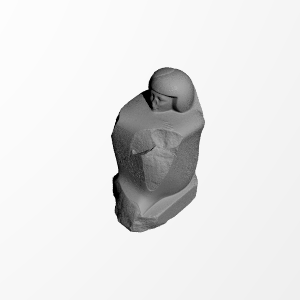