Unique Forms of Continuity in Space

3D
Scan The World
8,939 views 1,064 downloads
9 collections
Community Prints Add your picture
Be the first to share a picture of this printed object
4 comments

Unique Forms of Continuity in Space

Boccioni, who sought to infuse art with dynamism and energy, exclaimed, "Let us fling open the figure and let it incorporate within itself whatever may surround it." The contours of this marching figure appear to be carved by the forces of wind and speed as it forges ahead. While its wind–swept silhouette is evocative of an ancient statue, the polished metal alludes to the sleek modern machinery beloved by Boccioni and other Futurist artists.

Umberto Boccioni (Italian pronunciation: [umˈbɛrto botˈtʃoːni]; 19 October 1882 – 17 August 1916) was an influential Italian painter and sculptor. He helped shape the revolutionary aesthetic of the Futurism movement as one of its principal figures. Despite his short life, his approach to the dynamism of form and the deconstruction of solid mass guided artists long after his death. His works are held by many public art museums, and in 1988 the Metropolitan Museum of Art in New York organized a major retrospective of 100 pieces.
(Wiki) 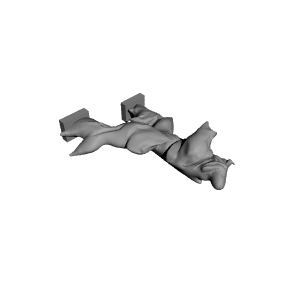