Bodhisattva under an Eight Headed Naga at The Art Institute of Chicago, Illinois

3D
Scan The World
4,414 views 119 downloads
Community Prints Add your picture
Be the first to share a picture of this printed object
0 comments

Bodhisattva under an Eight Headed Naga at The Art Institute of Chicago, Illinois

In Mahayana Buddhism, bodhisattva is the Sanskrit term for anyone who, motivated by great compassion, has generated bodhicitta, which is a spontaneous wish to attainbuddhahood for the benefit of all sentient beings. A bodhisattva is one of the four sublime states a human can achieve in life (the others being an arhat, buddha orpratyekabuddha). Usage of the term bodhisattva has evolved over time. In early Indian Buddhism, for example, the term bodhisattva was primarily used to refer specifically to Gautama Buddha in his former lives. The Jataka tales, which are the stories of the Buddha's lives, depict the various attempts of the bodhisattva to embrace qualities like self-sacrifice and morality.

Nāga is the Sanskrit and Pali word for a deity or class of entity or being, taking the form of a very great snake, specifically the king cobra, found in Hinduism, Buddhism, Jainism and Sikhism. A female nāga is a nāgī or nāgiṇī. Traditions about nāgas are also very common in all the Buddhist countries of Asia. In many countries, the nāga concept has been merged with local traditions of great and wise serpents or dragons such as the Burmese nat. In Tibetan religion, the nāga was equated with the klu  that dwell in lakes or underground streams and guard treasure. In China, the nāga was equated with the Chinese dragon. The Buddhist nāga generally has the form of a great cobra, usually with a single head but sometimes with many. At least some of the nāgas are capable of using magic powers to transform themselves into a human semblance. In Buddhist painting, the nāga is sometimes portrayed as a human being with a snake or dragon extending over his head. One nāga, in human form, attempted to become a monk; when telling it that such ordination was impossible, the Buddha told it how to ensure that it would be reborn a human, able to become a monk. 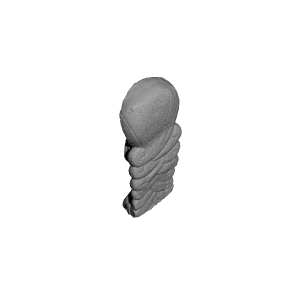 ×
0 collections where you can find Bodhisattva under an Eight Headed Naga at The Art Institute of Chicago, Illinois by Scan The World