3D
Featured Scan The World
4,472 views 318 downloads
2 collections
Community Prints Add your picture
Be the first to share a picture of this printed object
0 comments

A bodhisattva is a “promised enlightenment,” but delays its entrance into nirvana to help all living beings to attain illumination. The crystalline pupils are made of rock crystal. Such care is justified by the fact that the consecration of a Buddhist statue consisted in opening his eyes ritually. This ceremony gave him a soul and made it an object of worship. The tiara in her hair, the necklace on her chest, the drapery retained at the waist by an elaborate belt are the image of the historical Buddha, Shakyamuni. The bodhisattva originally stood in a temple next to a larger Buddha. The present presentation at the museum aims to restore the oblique angle of vision under which it appeared to the visitor in the Chinese sanctuary. 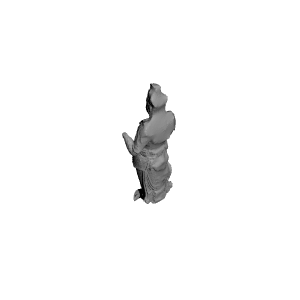 ×
2 collections where you can find Bodhisattva by geoffrey.marchal