Avalokiteśvara (Lord who looks down") is a bodhisattva who embodies thecompassion of all Buddhas. This bodhisattva is variably depicted and described and is portrayed in different cultures as either female or male. In Chinese Buddhism Avalokiteśvara has become the somewhat different female figure Guanyin. In Cambodia, he appears as Lokeśvara.

This Avalokitesvara sits upon mount Potalaka and was made in the Song Dynasty (960-1279). Mount Potalaka (traditional Chinese: 補陀落山; simplified Chinese: 补陀落山; pinyin: Bǔtuóluò shān, Japanese: Fudaraku-san), which means "Brilliance", is the mythical dwelling of the Buddhist bodhisattva Avalokitesvara, said to exist in the seas south of India. The mountain is first mentioned in the final chapter of the Flower Garland Sutra, theGandavyuha Sutra, where the chapter's protagonist journeys to seek the advice of the Bodhisattva Avalokitesvara. Later Buddhists, such as the Japanese Yogacara monk, Jōkei (monk) espoused aspiring rebirthon Mount Potalaka as an easier way to attain progress on the Buddhist path than the more well-known Pure Land of Amitabha Buddha. 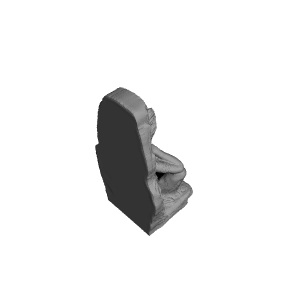 ×
0 collections where you can find Bodhisattva Avalokitesvara Potalaka at The Guimet Museum, Paris by Scan The World
×
Philippe Maegerman
@PhilippeMaegerman
0
Printed on: Other
Material: Others
Posted at: 07th July 2022