Bodhisattva Lokesvara Transformed into Siva at the Guimet Museum, Paris

3D
Scan The World
2,832 views 110 downloads
Community Prints Add your picture
Be the first to share a picture of this printed object
0 comments

Bodhisattva Lokesvara Transformed into Siva at the Guimet Museum, Paris

Avalokiteśvara is a bodhisattva who embodies the compassion of all Buddhas. This bodhisattva is variably depicted and described and is portrayed in different cultures as either female or male. In Chinese Buddhism Avalokiteśvara has become the somewhat different female figure Guanyin. In Cambodia, he appears asLokeśvara.

Avalokiteśvara is one of the more widely revered bodhisattvas in mainstream Mahayana Buddhism, as well as unofficially in Theravada Buddhism.

In the Tibetan tradition, Avalokiteśvara is seen as arising from two sources. One is the relative source, where in a previous eon (kalpa) a devoted, compassionate Buddhist monk became a bodhisattva, transformed in the present kalpa into Avalokiteśvara. That is not in conflict, however, with the ultimate source, which is Avalokiteśvara as the universal manifestation of compassion. The bodhisattva is viewed as the anthropomorphised vehicle for the actual deity, serving to bring about a better understanding of Avalokiteśvara to humankind.

Tibetan traditions assert that Avalokiteśvara is actually the Brahma that convinced Sakyamuni Buddha to teach rather than stay in seclusion after his enlightenment. He then became one of the two major disciples of the Buddha from the Deva realms. The other was Indra, King of the Gods, who became known as Vajrapani. 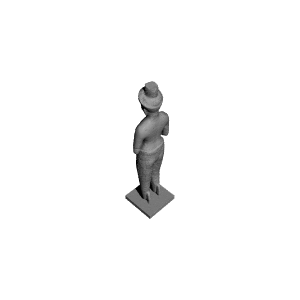 ×
0 collections where you can find Bodhisattva Lokesvara Transformed into Siva at the Guimet Museum, Paris by Scan The World