3D
Scan The World
2,095 views 72 downloads
Community Prints Add your picture
Be the first to share a picture of this printed object
0 comments

To the north-east of Athens lay the city-state of Boeotia and its principal city of Thebes. Agriculturally rich, Boeotia was hostile tomaritime Athens and, in the Peloponnesian War, Boeotia sided with Sparta. The Boeotians had their own artistic traditions and were especially prolific in the production of terracotta statuettes. These were mostly made for dedication at shrines. When the area allotted to them became full, the statuettes were gathered up and buried in pits.

This youth holds a puppy in his left hand, while another dog stands beside him. His hair is crowned with a wreath with central rosette. 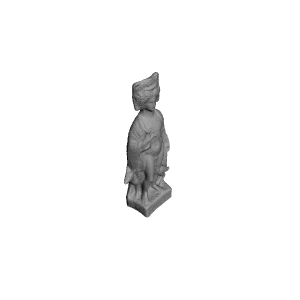 ×
0 collections where you can find Boeotian Youth 2 at The British Museum, London by Scan The World