3D
Scan The World
1,230 views 54 downloads
Community Prints Add your picture
Be the first to share a picture of this printed object
0 comments

This woman holding her child in her arms is an allegory of the suffering of the European population during the Second World War. The title of the sculpture leaves no doubt concerning the background of such a piece. The woman's very simple clothing, the basic shapes chosen to represent the human body, all these elements tend to ease the identification of the spectator to the subject.

Such a position inevitably evokes the Christic figure of the Pieta, as Mary holds her dead son after the Descent from the Cross – only here the pathos is emphasized by the child's young age.

Mari Andriessen has produced many sculptures for memorials of the Second World War, and the whole of his work has been deeply influenced by the war – like all artist of the mid-20th century. 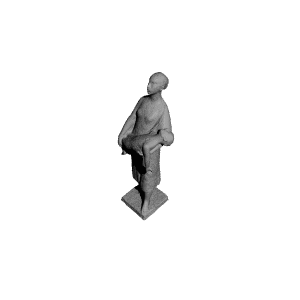