3D
360°
Featured Scan The World
4,647 views 892 downloads
10 collections
Community Prints Add your picture
Be the first to share a picture of this printed object
1 comments

This is a copy of the Borghese Gladiator, acquired in 1898 from an original Roman sculpture in The Louvre. The work was originally part of the Italian collection whose name is bears. Although coloqually known as a gladiator, the sculpture is actually a depiction of a fighting warrior. The piece, whose tree trunk bears the signature of Agasias of Ephesus, son of Dositheus, recalls the work of Lysippos, the great bronze sculptor of the fourth century BC. The accented musculature, however, bears the mark of the Pergamene school. Agasias revived the athletic heroism of Lysippos, blending it with the pathos of the Hellenistic period.

The Borghese Gladiator could be a Hellenistic copy - fashioned for a Roman client - of a bronze marble by Lysippos or one of his followers in the late classical period. The presence of the tree seems to confirm this hypothesis - it probably shows the need to strengthen a work that was originally in bronze, thus requiring no support - that was then transposed into marble, a much heavier material and more easily broken.

The exaggerated rendering of the musculature and the violence of the figure's movement - organized along a broad diagonal - recalls the friezes of the Pergamon Altar, erected in the early second century BC, which depicts the battle between the Gods and the Giants. The pathos in the treatment of the face accentuates the intensity of the warrior's efforts. 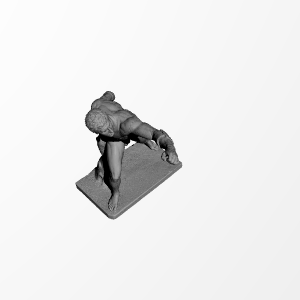