3D
Scan The World
1,692 views 95 downloads
Community Prints Add your picture
Be the first to share a picture of this printed object
0 comments

Brachiopods have a very long history of life on Earth (at least 550 million years). They first appear as fossils in rocks of earliest Cambrian age, and their descendants survive, albeit relatively rare, in today's oceans and seas. They were particularly abundant during the Palaeozoic Era (248 to 545 million years ago), and are often the most common fossils in a rock of that age.
The brachiopod Goniorhynchia boueti.
Brachiopods are marine animals belonging to their own phylum, Brachiopoda, of the animal kingdom. Modern brachiopods occupy a variety of sea-bed habitats ranging from the Tropics to the cold waters of the Arctic and, especially, Antarctic.

Brachiopods are virtually defenceless and their shell, enclosing the animal's organs, is their only protection. Most are permanently attached by a fleshy stalk (the pedicle) to a hard, sea-floor surface, such as a rock outcrop, boulder or some other shell, and are incapable of actively pursuing food.

A few species can attach themselves directly to soft sediment and others remain unattached. The pedicle is the only soft tissue that protrudes outside the shell which opens and closes to allow food-bearing currents of water to pass through it. 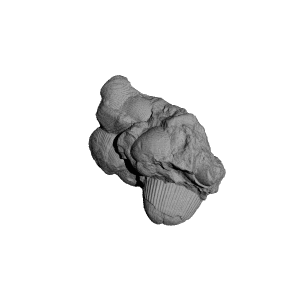