Brahma at the Guimet museum, Paris

3D
Scan The World
2,513 views 117 downloads
1 collection
Community Prints Add your picture
Be the first to share a picture of this printed object
0 comments

Brahma at the Guimet museum, Paris

This Brahma sculpture is from Cambodia, the Battambang province was made in sandstone in the Koh Ker style. It is believed to originate from the mid 10th century in Vat Baset. It scanned for us by a volunteer using roughly 50 photographs.

Brahmā is the Hindu god (deva) of creation and one of the Trimurti, the others being Vishnu and Shiva. According to the Brahma Purana, he is the father of Manu, and from Manu all human beings are descended. In the Ramayana and the Mahabharata, he is often referred to as the progenitor or great grandsire of all human beings. He is not to be confused with the Supreme Cosmic Spirit in Hindu Vedāntaphilosophy known as Brahman, which is genderless. Brahmā's wife is Saraswati. Saraswati is also known by names such as Sāvitri and Gayatri, and has taken different forms throughout history. Brahmā is often identified with Prajapati, a Vedic deity. Being the husband of Saraswati or Vaac Devi (the Goddess of Speech), Brahma is also known as "Vaagish," meaning "Lord of Speech and Sound." 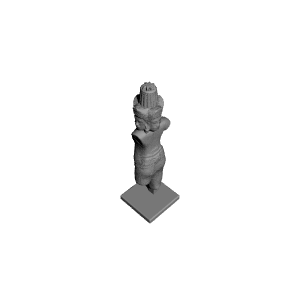 ×
1 collections where you can find Brahma at the Guimet museum, Paris by Scan The World