The relief depicts an episode from the beginning of the antique, Greek poet Homer’s grand poem the Iliad, which tells the story of the Greek ten-year siege of Troy. During a raid in the area around Troy the Greek kidnapped women, which the warriors then divided amongst them. The powerful King Agamemnon had Chryseis and Achilles had Briseis. The gods, however, forced Agamemnon to let Chryseis go, which he only reluctantly did on the condition that he instead would have Achilles’ Briseis. The relief shows the handing over of Briseis. Achilles, who is seen cornered to the far left, has to yield to the superior power, but his anger or pain is expressed by his tense – and for Thorvaldsen atypical – posture. According to the Iliad Achilles from then on refused to take part in the continued siege; his turning away can be seen as an image of this. 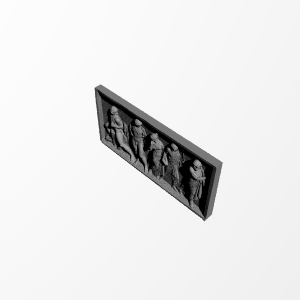