3D
Scan The World
2,789 views 211 downloads
2 collections
Community Prints Add your picture
Be the first to share a picture of this printed object
0 comments

This bronze bell is known as a bo. It is decorated with dragons swallowing geese and has a handle in the shape of two dragons. It required great skill to make a bo and bells of similar size were not made in the west until a thousand years later. This bo would have been part of a set of bells of different sizes each playing different notes. It is played with a hammer and plays two different notes depending on where it is struck.

This bell was made at the beginning of the Warring States period - a time of political fragmentation and moral crisis in China. It was in this turmoil that the Chinese political philosopher Confucius developed his philosophy. Confucius had one overwhelming message: if we are to achieve a state of orderliness and peace, we need to return to traditional values of virtue. Confucius was also a keen musician and saw in music the harmony he wanted to achieve in society.

Printed in FormFutura EasyFil White @ 215, heated bed @ 65, Med quality, 15% infill, standard support and raft settings. This object doesn't really need any support, unless you want the inside of the bell to be perfect 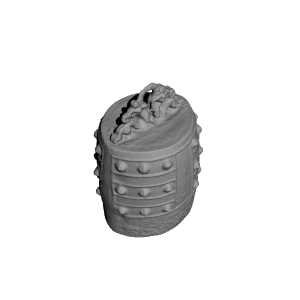 ×
2 collections where you can find Bronze Bell (bo) at The British Museum, London by Scan The World