3D
Scan The World
2,600 views 87 downloads
Community Prints Add your picture
Be the first to share a picture of this printed object
0 comments

The Zhuang peoples of Yunnan and Guangxi have a rich tradition of written and unwritten stories. Zhuang folk stories often take the form of songs. There are various folk tales, myths, legends, and historical poems and chants. For over one thousand years they have used Sawndip to write a wide variety of literature, including folk songs, operas, poems, scriptures, letters, contracts, and court documents. "The Origin of the Bronze Drum" tells of the origins of bronze drums that are like "stars" (such drums have a star in the middle of them), that they are as many as the stars of the sky and like stars can ward off evil spirits. 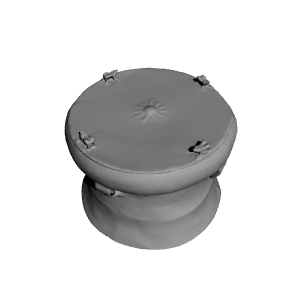 ×
0 collections where you can find Bronze drum in Quai Branly, Paris by Quai Branly